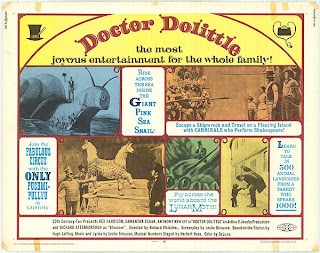 My dog says he just watched the 1967 version of Doctor Doolittle and had no idea what a progressive animal rights message it had. The veterinarian becomes a vegetarian because he loves animals, liberates a sad seal from a circus, protects a fox from a hunter, and treats all animals with respect and kindness. Truly a special man, indeed!

The best song in the film is called "Like Animals". It's from the scene where the doctor is sentenced to an insane asylum for talking to the animals, because, of course, they're not people--they're just animals!

Although we tried to find a video clip for the blog, the only one we could find couldn't be embedded here due to copyright laws. However, take a look at the lyrics below. If you love animals like Doctor Doolittle did, you'll find the words quite enchanting and powerful!

I wonder —
Why do we treat animals like animals?
Animals treat us so very well.
The devoted ways they serve us
And protect us when we’re nervous,
Oh, they really don’t deserve us,
All we give them is hell!

Tell me how else man repays them —
Do we ever think to praise them?
No we don’t, and this dismays them. You can tell.
We’re riddled with ingratitude,
We give no love or latitude,
In every way our attitude
Is, well, like animals.
No, no — that’s not what I mean.

I mean —
Why do we treat animals like animals?
How can people be so inhumane?
Cows and chickens work to feed us,
Dogs and horses show they need us,
And though cats don’t always heed us
Their affection is plain.

What do we do? We neglect them,
We do nothing to protect them,
We reject them, don’t expect them
To complain.
We ignore them or we beat them,
When we’re hungry then we eat them,
It’s appalling how we treat them,
It’s insane!

We humiliate and murder and confine them.
We create their wretched status,
Then we use it to malign them.

A man of ill repute is called a “weasel” or a “rat,”
A woman you dislike becomes a “vixen” or a “cat,”
A family that is blessed
With healthy reproductive habits
Occasions the remark,
"Well you know them, they “breed like rabbits”!

When will we stop treating them like animals?
Is the human race entirely mad?

Women see a baby goatskin
Or a lambskin or a stoatskin
And to them it’s just a coatskin —
Oh, it’s terribly sad!

When you dress in suede or leather,
Or some fancy fur or feather,
Do you stop and wonder whether,
For a fad,
You have killed some beast or other,
And you’re wearing someone’s brother,
Or perhaps it’s someone’s mother
In which you’re clad?

* For now, you can see the video clip of this song on YouTube by clicking HERE. However, it could be taken down anytime. Tweet
at 8:32 AM