My dogs says today we're taking a look at the Zignature Limited Ingredient line of foods. We're always looking for new wet foods to add to the dogs' rotation, so we'll be reviewing the turkey formula canned food for dogs. We've had a lot of success with the Zignature kibble, so we're excited to see what the dogs think of the wet. 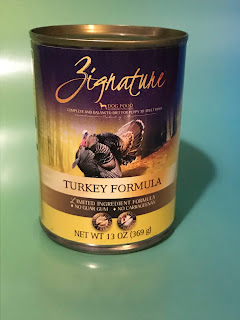 This food is a meat-first recipe and the limited ingredient emphasis means that it lacks ingredients that can sometimes be problematic for dogs, such as chicken, corn, wheat, soy, and potatoes. The first five ingredients in this formula are turkey, turkey broth, turkey liver, peas, and turkey meal. The turkey is sourced from America and the food is made in the United States.

We liked the consistency of the Zignature. Enough moisture to be appetizing and easy to eat, but not so much that it was gloppy. A very good balance. 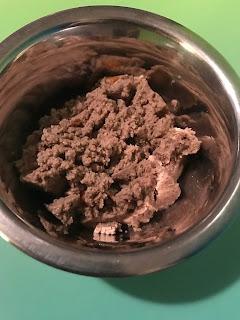 We let Alexander be our test subject for the Zignature canned food and he took to it immediately and finished it all. We gave him the food on it's own, but will put in on top of our Zignature turkey recipe kibble next time. 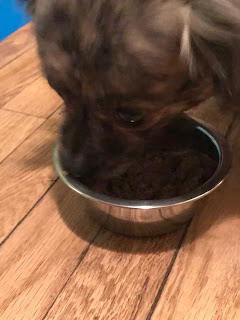 The Zignature Limited Ingredient Turkey Formula from Chewy was a success and all the pups have since given it their seal of approval, as well. So, the crew at My Dog Says Woof gives this product four out of four paws up! The Zignature line has been a proven winner in our house and we look forward to trying more items from them in the future!

Disclaimer: As a Chewy influencer, we received this product for free so we could sample it. Our reviews, however, are not bought or paid for and you can count on My Dog Says Woof to give you an honest assessment in all our product reviews.  Tweet
at 1:00 PM