My dog says today we're going to look at a brand that is new to us: Sojos. This company has been around for almost 40 years, but it's one we weren't familiar with so we wanted to check it out.

We decided to sample the Sojo's Mix-a-Meal Freeze Dried Turkey, which is grain free. Chewy.com has it listed as a topper so it seemed like a good first product to start with. 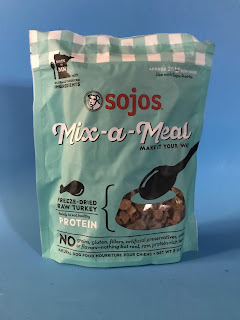 When the package arrived, we saw the spoon over the bowl on the front of the bag and we started to wonder if it was a food we needed to add water to. We read everything on the bag and it said nothing about water, so we used it as a topper and a treat.

The Sojos Mix-a-Meal has one ingredient: turkey. It's a ready-to-eat protein that can be added to any food. Sojos ingredients are globally sourced, but nothing comes from China. The product is made in America in the state of Minnesota.

We wanted to give each of the dogs a nugget to sample first, fully intending to snap a photo and then move on to feeding...but that was not to be. As soon as we opened the bag and started to pour it into a bowl so we could take a photo, a full scale riot ensued! The dogs started running around, barking, and jumping. They were beside themselves trying to get to the food. It was unlike anything we've ever seen!

Important Note: We poured the nuggets into the bowl for photo purposes only. The food should not be served this way. It needs to be added to something else (e.g. kibble, pre-mix, wet food, etc) so it's a complete and balanced meal. 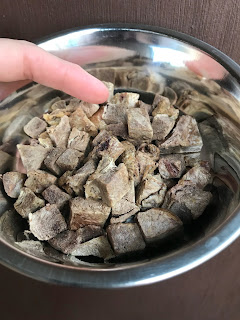 We quickly took the bowl and started to hand out samples with one hand, and held the camera with the other so we could snap a picture of them taking the nuggets. Well, we literally couldn't take a photo quickly enough before they snatched the nuggets and gulped them down. We tried...and tried...and tried. The camera simply couldn't take a photo quicker than the dogs could wolf down a nugget! Soooooo, that said, here's a pic of two of the pups with blurry tongues after grabbing and gulping down the Sojos nuggets. 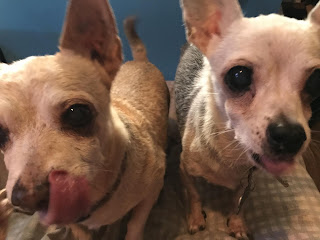 We were thrilled with how much the pups loved the Sojos, so we looked around Chewy to see what other products Sojos offers. They have a ton of items to choose from and there's a premix that can be used with this "protein" line so you can offer your pup a nutritionally-balanced meal. We'll have to try that next.

Chewy offers an 8 ounce bag of the Sojos Mix-a-Meal freeze dried turkey flavor. Even though 8 ounces doesn't sound like a lot, you'll be surprised how big the bag is. We have small dogs in the house and know this bag will last awhile (remember, this is for supplemental feeding and isn't a well-rounded meal on its own so it'll last longer than you might suspect).

Based on the mayhem that ensued the moment we opened the bag, we give the Sojos Mix-a-Meal an overwhelming four out of four paws! We highly recommend you try this product!

Disclaimer: As a Chewy influencer, we received this product for free so we could sample it. Our reviews, however, are not bought or paid for and you can count on My Dog Says Woof to give you an honest assessment in all our product reviews.