My dog says today we're trying out the salmon formula of Zignature's canned food line for dogs. Zignature is a brand we discovered about a year ago and we've tried several of their products with much success. Zignature offers a lot of canned food varieties on Chewy.com and we decided to test out the salmon flavor. Was it a hit or miss? Read on for the fishy results. 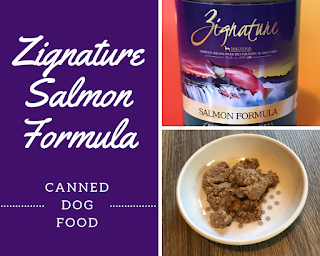 We've tried several fish-flavored foods in recent years and salmon always seems to be a flavor that goes over well (and it supports healthy skin and soft coat). It's generally flavorful, without being overly fishy. When we opened the can, you could smell the salmon but it wasn't overwhelming. Basically, smelly enough to be enticing! (Plus, the salmon is sourced from the Northwest United States and the food is made in America so that's something we like a lot!) 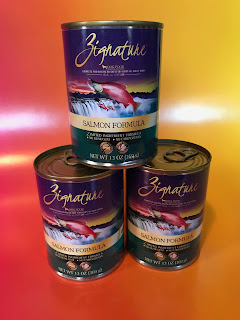 Since this is a limited-ingredient recipe, you'll find some simple ingredients along with traditional vitamins and minerals. The first five ingredients are salmon, fish broth, salmon meal, peas, and chickpeas. This recipe has powerful antioxidants and low-glycemic carbs. The peas and chickpeas are also healthy sources of fiber. The Zignature salmon recipe is also hypoallergenic and is void of the most common doggie allergens such as corn, soy, wheat, chicken, and dairy.

Alexander is tired of waiting to eat, but we'll get there soon... 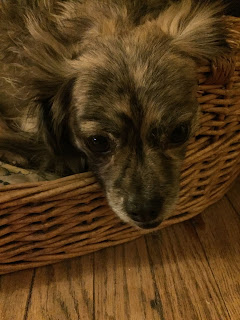 We really like the consistency of the salmon recipe, as well. It was soft, but not gloppy. We're not a fan of canned foods that are hard, so consistency is something we pay attention to. So far this looks and smells like good stuff...but is it yummy to the tummy? 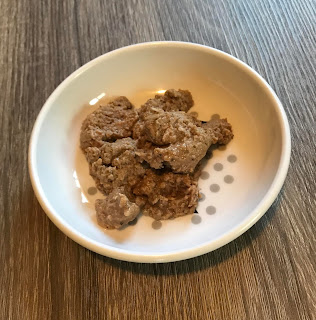 Our pups say yes, yes, yes! They like the salmon flavor way more than the chicken formula that they tried in the past. (That's actually a good reminder to try different flavors as it sometimes takes a little trial and error to find what recipes your pup prefers!) In short, the furry reviewers here at My Dog Says Woof give the Zignature Salmon Formula Canned Dog Food from Chewy.com four out of four paws up, up, up!

Disclaimer: As a Chewy influencer, we received this product for free so we could sample it. Our reviews, however, are not bought or paid for and you can count on My Dog Says Woof to give you an honest assessment in all our product reviews. Tweet
at 10:28 PM