My dog says he thinks it's fantastic that Jillian Michaels (uber-trainer on The Biggest Loser) wore a t-shirt on this week's show with a dog-friendly message. Thank you to Jillian for using her celebrity to bring light to the issue of animal-overpopulation and breedism!

Also, on Jillian's Facebook page she recently announced that she'll be adopting a vegan diet for the month of January! Thanks for being a friend to animals, Jillian. Two paws up! 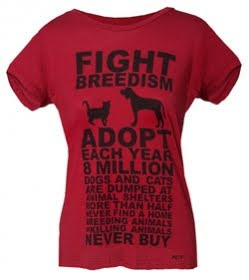