My dog says we have another new cat food to review today: Purrfect Pairings by Solid Gold. This line of wet cat food comes in six varieties and we are excited to share with you our thoughts on the Savory Mousse with Shrimp and Goat Milk flavor (doesn't that sound yummy?). 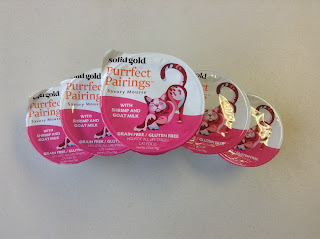 Normally we like to see meat as the first ingredient in our pet foods, but we made an exception on this product because we really liked the ingredient list as a whole. That said, the first ingredient in this flavor of Purrfect Pairings was water sufficient for processing, but the next three ingredients are shrimp, salmon, and tuna. The food smells deliciously fishy, but isn't overbearing. This is also a grain-free food, which we always love, plus there's goat milk!

After opening the cup and dishing it out for KitCat, we quickly realized why water is the first ingredient. The Purrfect Pairings food is wonderfully light and soft; now we get why they call this a mousse. It's just as soft, if not softer, than canned kitten food. After reading more about this product line we realized it is 75% moisture, so it's designed to be a good dietary source of water for your cat's urinary tract health. 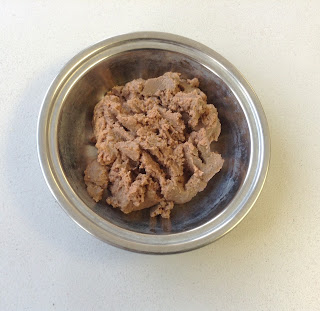 Purrfect Pairings comes in 2.75 ounce cups; that makes it a smidge less than what you'll typically find in a small can of kitten food. That said, the mousse style plumps up the food and it actually looks like significantly more than it actually is (the cups are even bigger than you'd expect). Solid Gold says to feed two cups per six pounds of body weight, however you could also serve less if you wanted to offer your cat a snack.

When ordered from Chewy (which is where we get all our food and supplies), Purrfect Pairings comes in a six-cup case. To ensure the foil lids don't get pierced, it's packaged nicely in a tray which is easy to store in your pantry. 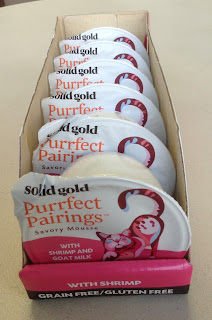 The foil is easy to peel back and the mousse looks and smells great. 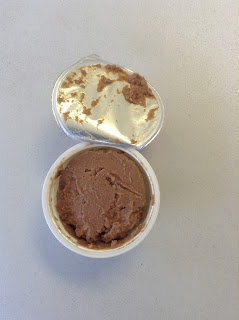 When we gave KitCat the food, we weren't in the least bit surprised that he goggled it up. It smells good, has great texture, and looks delish. 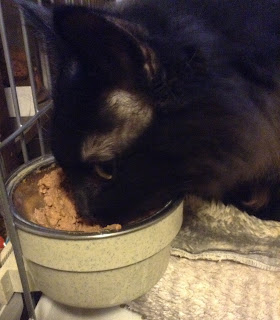 KitCat is happy to rate the Solid Gold Purrfect Pairings mousse an enthusiastic four out of four paws! We look forward to trying the other five flavors soon.


Disclaimer: As a Chewy influencer, we received this product for free so we could test it. Our reviews, however, are not bought or paid for and you can count on My Dog Says Woof to give you an honest assessment in all our product reviews.  Tweet
at 10:58 PM